I love the world

Focus on the children in our world who should have it better.

The unofficial opening of the World Cup took place in 2006 with the “Sky Arena” project in Frankfurt on the banks of the River Main.

On the skyline, the 9 skyscrapers of the city, huge projections were thrown with laser beams (200 metres high). The skyscrapers were covered with canvas foils beforehand. In addition, 200 loudspeakers were available to play the music. In addition to the opening show, the so-called overture, the phenomenon of football was to inspire the 250000 visitors per show (3 shows in total) with e.g. pictures of Pele or Eusébio, the Belgian artist Marie-Jo Lafontaine was commissioned to create an alternative film.

The focus here was on the children in our world, the new generation that should have it better, but are prevented from doing so by powers such as politics, money, the press or technology that have not changed so far. A risky theme that was realised but fraught with many problems. For example, photos of non-European children were censored because they might snub certain social classes. People were afraid of attacks, understandable with so many visitors. However, it was courageous of the city, as well as of Marie-Jo Lafontaine, to be allowed to express some criticism in addition to populism. Characteristic for this situation: the Hessischer Rundfunk broadcast the presentation of “I love the world” live, but the ARD preferred an interview with Franz Beckenbauer instead, although our project was announced in the TV magazines. Freedom of the press was thus only present to a limited extent.

Doing a sound reinforcement with 200 loudspeakers (26 towers) was a new experience for me. You could only work semi-stereo anyway, volume ratios could only be estimated in rehearsals at night, because with so many visitors the level had to be readjusted again and again during the performance. So I walked along the edge of the Main with walky talky to get a picture of the whole thing myself and possibly make changes. 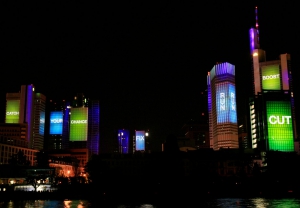