Electronic music with the clicktrains of dolphins

The Netherlands has a new radio channel: Radio 6.
A channel entirely devoted to jazz, world music, crossover and culture. Unique in the history of Dutch radio.
But, before that, wasn’t there any jazz,. world music and crossover on the radio? Oh yes. there was. Radio 4 used to broadcast a mixture of classical, contemporary, Jazz, world and experimental music, and every interesting kind in between.

‘Used to’, because since September 2006 Radio 4 has been devoted entirely to classical music. A conscious limitation!
After some 20 years with Radio 4 music producer Co de Kloet became music editor-in-chief with the new Radio 6 channel. A job that requires a lot, but it also gives a lot in return.
Despite the new dynamic environment that both the audience and many national and international musicians and composers considered a cultural oasis, Co de Kloet was left with a dissatisfied feeling after the radiophonic castration of his old home port.

The contributions were to be limited to frequencies between 444 and 4444 Hz.
The contributions could not be less then 4 seconds and not exceed 44 seconds.
Including presentation For Four (4/4) takes 44 minutes and 44 seconds.
All 44 names are mentioned in the work.
It was edited in 44 hours. 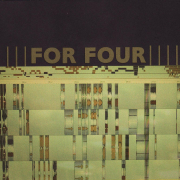