Apples And Potatoes ( a concept)

Sound collage about the live of apples and potatoes in a cellar.

The composition Apples and Potatoes was to be based on the children’s play ‘Der Zankapfel’, which was developed in the experimental theatre at the University of Erlangen (Germany). Pupils of the 4th, 5th and 6th classes of the Kaiser-Heinrich-Gymnasium in Bamberg drew and wrote pictures and essays under the title ‘The Box Dwellers’ in November 1971, which were to contribute decisively to the text and image design of the play. Entire theatre scenes with attached stage directions were even developed; children were supposed to design a play for children.
The idea therefore did not seem far-fetched to have children also design the music for the play, i.e. text images were to be formulated musically. Unfortunately, the play was never written and performed in Erlangen.
Therefore, in 1977 I conceived an audiovisual composition on the same theme based on sounds, which I recorded on tape with blind children in Holland a few years later.

Inhibitions of the children that could result from a lack of instrument knowledge were thus excluded.

Within a few months, this method of realisation produced sound materials that were recorded on tape. With the help of small electronic means, such as reverberation or filters, these musical structures were processed into a collage.

2. The audiovisual composition Apples and Potatoes

I decided to do this work with blind children for the following reasons:

a. A socially marginalised group is given the opportunity to come into the public eye.
My expectation was to find a world of imagination of blind children that they could specifically translate into sound constellations.

It turned out that the blind children developed specific ideas of speaking of apples and potatoes. Each of the blind children was given an apple and a potato to ask about the texture of the objects. This experience, via the senses of touch and taste, was then to be expressed in sound structures.

The voice seemed to me to be a familiar instrument that could translate the children’s ideas and feelings into music in a direct way.

Inhibitions of the children that could result from a lack of instrument knowledge were thus excluded.

Within a few months, this method of realisation produced sound materials that were recorded on tape. With the help of small electronic means, such as reverberation or filters, these musical structures were processed into a collage.

The slide material was arranged according to two main themes:

First the apples, then the potatoes are presented, i.e. the appearance of the two groups and their living conditions. The apples are smooth, round and clean and live, wrapped in paper, in a box. The potatoes are dirty and wizened, sprouting and lying jumbled in a corner. Through the rotting process, the opposites blur and eventually change into the opposite. The apples become soft and mushy, the potatoes get mysterious-looking eye nets and remain firm. At the end of the visual composition, the utility value of the two groups is recalled. The potatoes are turned into chips, the apples into apple juice. I do not want to go further into the social background of the piece here, but I would like to briefly point out that external appearance features say nothing about intrinsic values. Blind children are pushed to the margins of our society because of their handicap. They live in isolation.

The audiovisual composition will be about 15 minutes long. The piece should be presented in two different ways:

a. in concert form – the slide projection will run in parallel with the sound via a pulse generator
b. in book form

The presentation through the book requires a listening-reading score and allows “music to see”, i.e. the reader can follow the music and the photographs at the same time with an attached cassette, retracing the visual process of the piece. A broadcasting company (VPRO) called this presentation “sound book for the non-blind”. Apples and Potatoes is a sound book for the non-blind by the blind”.

In addition to the composition, some of the high school students’ essays could of course be printed, as well as their visual ideas of apples and potatoes, which were developed in art education classes. The book form thus allows for a more intensive engagement with the subject.

The book is designed for both children and adults.

Finally, I would like to point out that audiovisual art forms are playing an increasingly important role in our lives together. The confrontation with new media sets new pedagogical accents for publishers and television companies.

Apples and Potatoes has not yet been realised. Parts of the slide projection have been completed as well as first compositional sketches. The grammar school essays and pictures have not been published further. 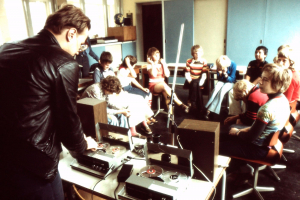