A reminiscence of the artist’s own puberty problems,

The collage ‘Ave Maria…’ is a reminiscence of the artist’s own puberty problems, i.e. behavioural expressions that arose from the realisation of confrontation with social norms. Not being able to cope with the environment, which manifests itself in doubts about others and oneself, gave rise to a composition that depicts senseless and senseless snatches of sentences in an English pub. Conversations reflect the insecurity, depression and frustration of the pub-goers in often surrealistic word usage. Ideals are hinted at, but they are reduced to absurdity. Talking to each other seems as pointless as the flowing of water in a river of talk (H.Hesse: Siddharta) (see text: first speaker).

The second speaker also doubts any commitment, on the one hand considering something to be over (the culture is down), yet on the other hand considering it to be worth striving for (go around). The music for this text is a clichéd jazz improvisation for piano. One’s own insanity is expressed in the ‘Wagnerian’ movement.  ‘The hand …’, which then also disintegrates into semantically and syntactically incomprehensible vowel and consonant forms. Over the whole piece lie various kinds of water sounds. The selection depends on the text and the musical tension. At the end of the composition, the sound structures flow into a gully. The acoustic function of the water thus predominates. The last flowing drops of sound fall. The whole musical picture has dissolved into nothingness. 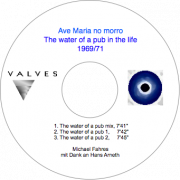