‘Crossroads’ consists of four compositions for solo instruments. The four concerts are very intimate (small number of listeners) and only open to the public on a limited basis (by invitation). The places where the concerts take place are determined by traditions and cultures of the past. They can also be places that look to the future; for example a revolutionary building concept within architecture. Light could play an important role here.

The audience is taken by bus from a central location in the Netherlands to a place they do not yet know.

The four compositions for solo instruments differ from each other in their size – the field road is narrower than the avenue – and in the thematic approach of the melodies. Each composition is about 20 minutes long.

The melody has the future 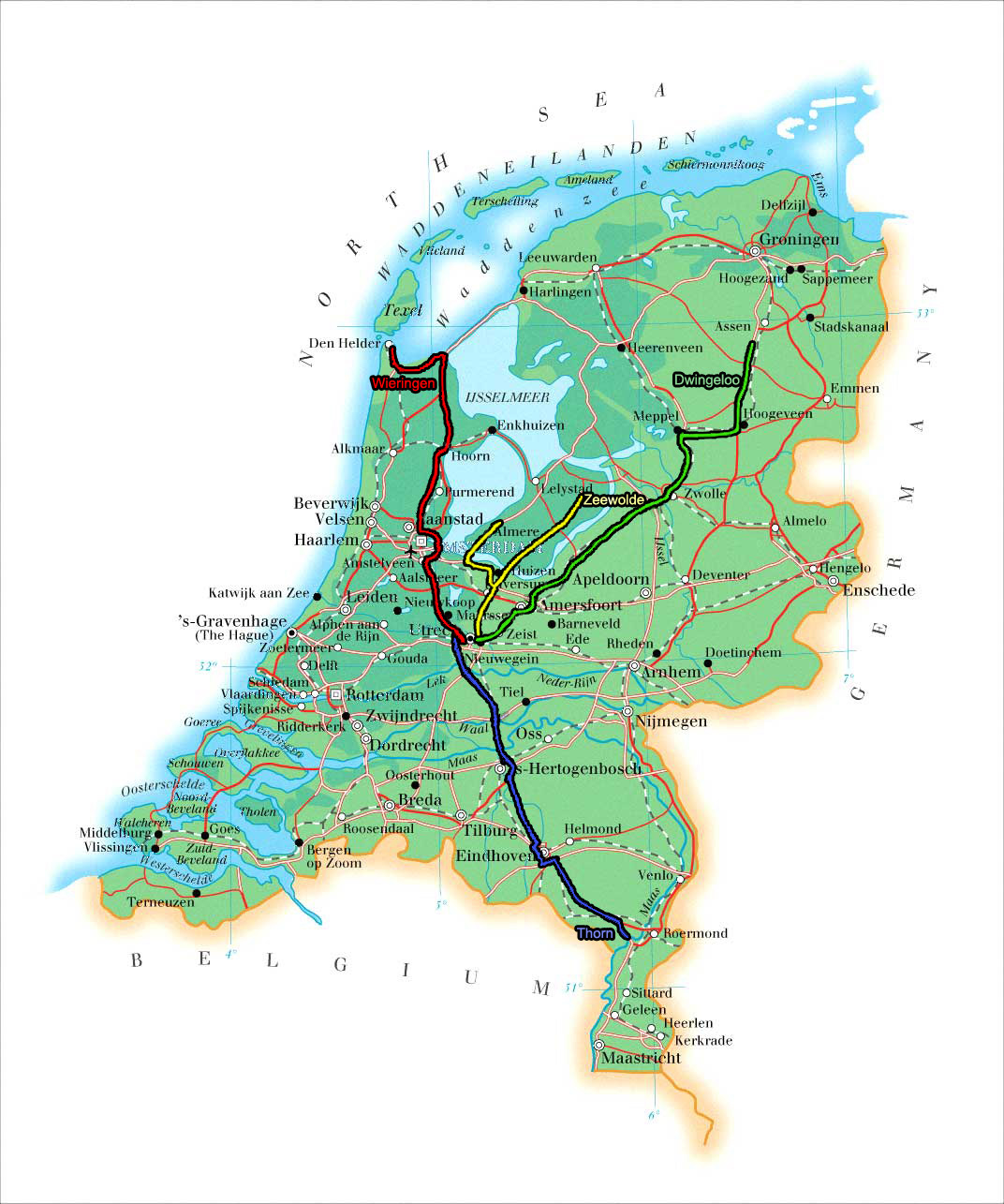 Melodies are built on sand. In this almost proverbial sense, sand dunes move in the Sahara. Millions of grains of sand, pushed, bumped and rubbed against each other many times, pushing forward. The dune resounds, it sings its melodies – a continuous flow of small pitch changes and irregular rhythms. Superficially heard, they seem random, but they are the result of energy created by the friction of countless grains of sand. The sandbars begin to sing their song, sometimes threateningly, then sadly, as if their way had been buried under sand for too long and had only now come to life.

‘Crossroads/path’ whispers. The sand runs between her fingers. Coarse, medium and fine sand trickles, clicks and rolls over mirrors, metal, cardboard and paper and makes itself heard.

But paths must first be trodden. In an at first unknown, untouched musical landscape the listener explores his own path. He is a boy scout, perception is his compass that guides his way. The path leads and guides.

Carefully, the metal tires of the wagon wheel dig their way through the sand and leave traces on the path. They are memories, archaic melodies that accompany the traveler. 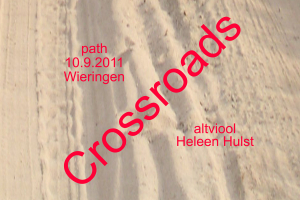 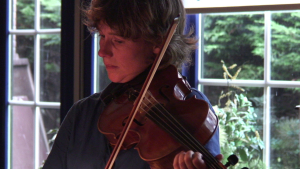 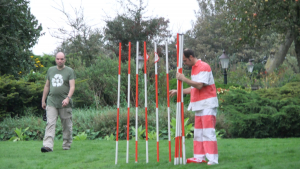 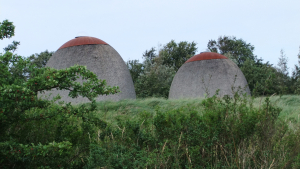 The composition ‘Crossroads/Lane’ is based on a melody diary that I have compiled over the past months by singing and humming melodies and their rhythms. Of course, anyone can do this. The composer is able to creatively musicalize these melodies and merge them into a whole.

‘Crossroads/Lane’ took place in an atelier for lead glass windows in the small town of Thorn (limburg), a magical place, which the clairvoyant Jelle Veeman (1922 – 2007) visited, perceived special energies and powers there and described them in the book ‘12 magische plaatsen in Nederland’ (ISBN: 9789061342793, 1986, Hans van den Bosch).

After my concert ‘Sunwheel’ (1992) in the sun observatory of Robert Morris in Lelystad I had met Jelle Veemans and read his book. For Jelle Thorn was one of those magical places and so ‘Crossroads/Lane’ should take place there, a reminiscence to this parapsychologist who had died in the meantime.

Furthermore, traffic played a special role in ‘Sunwheel’, as a motion detector measured the traffic flow and the data obtained influenced the rotation of sounds in real time.

‘Crossroads/Lane’ takes up these thoughts again. Sound recordings of moving objects such as cars, motorcycles and trucks were made in a crypt, for example. This created alienation effects, gave the sounds different acoustic properties, which transposed them from their usual reality into a perhaps magical space.

Place and time can no longer be determined, paths fade away, orientation no longer seems possible. The listener goes his way in ‘Crossroads/Lane’, the goal is uncertain and so he lets himself drift, no matter where it leads.

‘Crossroads/Lane’ is a road music, a music film, which is composed in a cinematic, visually associative way, with an arc of tension, which captures the constant change of melody and rhythm in different musical styles. 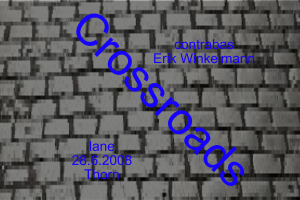 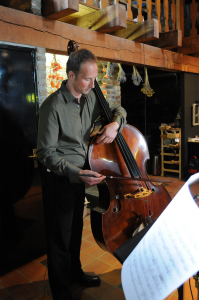 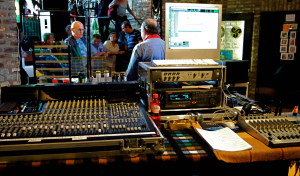 The ball has neither edges nor corners, it rolls its way, the cycle, the goal is uncertain. One cannot determine its rotational movement.

The ball is uncanny to us, it could roll over us, take us to an unknown place where we are lost. The fear of the randomness of something happening makes us hesitate.

Where does the path of the sphere lead us, which direction does it take?

There are people on the street, rushing, lingering, jumbling, bumping, whirling, lively, fast and excited, then again pausing without stopping. People of different races, cultures in the streets of the city, in confusion, sometimes in step, against each other, with each other. Crowds of people block the passage on the street, or leave niches that invite.

We hear the people in the street, on the square with the huge ball track that makes the bells ring, or at the church fair with the carousel that rotates on ball bearings.

We hear the balls colliding on the playing table, the dark rumble of the wooden ball on the glass plate, the elegant gliding of its mass and surface.

The melody, different, exotic, meditative, confusing, then again lingering and waiting, purposefully indicates the direction. It can branch out, or stop unexpectedly. But it moves in a straight line untiringly towards the horizon, to the music. 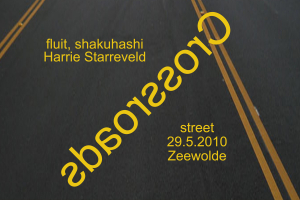 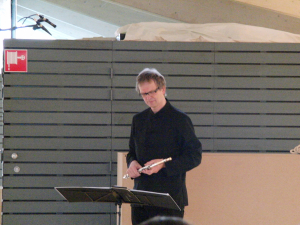 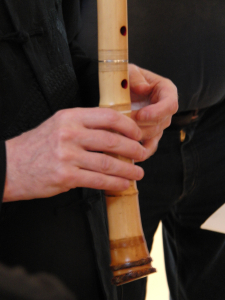 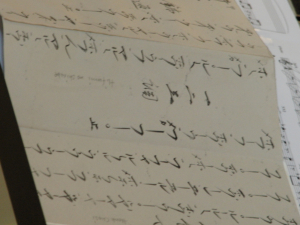 On Saturday, April 2, 2011, the premiere of ‘Crossroads’ took place in Dwingeloo (Drenthe). This work for oboe and humming tops was played by Frank van Koten, who until 2005 played with the Radio Philharmonic Orchestra.

The Königsallee in Düsseldorf, the Champs-Élysées in Paris or 5th Avenue in New York, we walk along an avenue, sometimes accentuated by greenery. The Avenue, stately, splendid, wide, the end not in sight. An inconceivable expanse that makes you feel the unreachable.

The Avenue invites you to linger. But its visit can exhaust you, as the endless length takes your breath away. Finally as if cut off, then the endless escape. Sadly, the runner moves across the avenue. Outward appearances are forgotten, dreams of glory and glory faded.

The spinning top is a rotating, rigid body in which forces and movements are bundled. It stores energy. But external influences, such as friction, finally bring it down.

In technology, gyroscopes are therefore used for stabilization and navigation, since the direction of the angular momentum remains the same when no force is acting on it.

Then the gyroscope runs, it drives the listener along the avenue that opens up other spaces that are imagined and therefore banish nothingness into the distance.

Together with the artist Pieter van der Veen, our passengers on the bus worked on a special work of art about the cosmos. 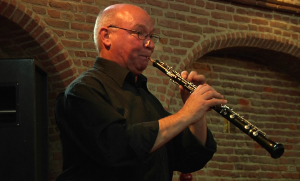 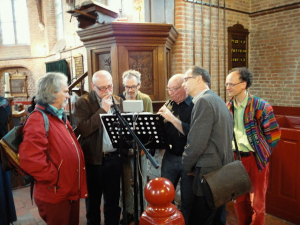 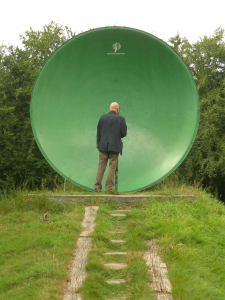 After the four Crossroads episodes, I wrote the two-part quartet Crossroads/Plateau in 2011. This composition is a logical sequel to the four solo works. The same instruments were used in Plateau. The musical aesthetics in the first is similar; the second part, on the other hand, plays with other, new ideas.

In January 2012, we asked all participants in Crossroads to send us their visual material (photos, film). It should not become a documentary, but a memory of the four journeys, in which the impressions are reproduced and creatively visually edited. In January 2013, the finishing touches were put on this video.

Peter van Cooten made a Crossroads remix in February 2012, in which he extensively incorporated the background sounds of the four Crossroads solos. This remix was partially used in the video.

In cooperation with the University of the Arts Utrecht (HKU), we put together a programme for a day in Utrecht; the intersection of the four Crossroads works. It was to be a summary of the earlier days: music, poetry and visual art, with various artists who had already collaborated. Unfortunately, the subsidy applications we submitted were rejected, so this could not take place.

The quartet Crossroads/Sho-w has the same line-up as Crossroads/Plateau. Sho-w begins with the second part of Plateau, in which cultural influences from the Occident can be heard. This is followed by the Sho, a kind of bamboo mouth organ and Japanese word sounds, which bring one into the Japanese sphere. Crossroads/Sho-w refers to and shows (show) other worlds, not opposites, but united in a musical context. The composition was completed in March 2013.

As already conceived in 2008, Crossroads (without additions) would become a synthesis of the four solo works.

The instruments are heard in sevenfold; so, for example, there are seven violists, sitting behind each other and being led and instructed by the first violist. Twenty-eight musicians are needed, forming four different instrument groups. The musicians who play the solo parts in the four different pieces are thus the impulses of their own instrument group in Crossroads.

Crossroads was supposed to be accessible to a wide audience and to be performed in a regular concert hall. Unfortunately, we have not been able to realise this.

Then there is only one thing left:

The only true realist is the visionary.