Everything that people do, including composers through their works, are accumulations, aggregates.

Everything that people do, composers too through their work, are accumulations, aggregates. Whether this constitutes a fused whole or an accumulation of parts is unnecessary to analyse, even today in art.

Thus, there were aggregates before the machine age, strictly speaking before the electrical age, before the time of these electro-mechanical monstrosities called technical aggregates (see fig. Tylers Museum).

The fact that mechanical labour, kinetic energy, electrical potential builds up to the certain moment, due to the climatic, difficult to predict discharge, was one of the composer’s inspirations.

If one group of the orchestra works as ‘soundworkers’, then the concentration and the sense of the event belongs to another group of the orchestra – made out of sound. The former in the chronological order, the latter as a moment, as in a flash or short ornamental arabesque, like the succession, obscures (eviscerates) the course of the performance. Division of labour in the orchestra, more or less as agreed in the ‘concerto grosso’.

Something else resonates in “Aggregate”, the solution. FWJ Schelling wrote in his famous fragment ‘Weltalter’ of 1813:

From time immemorial, all naturalists believed that in their explanations of the gradual formation (development) of the earth, indeed of the formation of all visible nature, they had to put forward a state of solution.

But in our time (Schelling’s time) (…) one was content with a liquid solution, (…)
As if the liquid could actually be the last thing on which one could stand, an unconditional state that could not be explained any further. However, we also believe to be able to prove in another way that the oldest state of all matter and in particular of all world bodies is one of an electric solution.
The work’s own (a)tonality makes it possible to experience an electrical solution metaphorically.

Among the riches for the concept of ‘aggregate’ are the five aggregates in the sacred Buddhist texts. The mental and physical aggregates that an I needs, so it is said. Producer-consumer, composer, interpreter and hearer provide their individualistic aggregates such as body, feeling, discernment, formative mind factors and consciousness. In this way of existence, we also function more or less subtly during a premiere.

Of all the accumulations 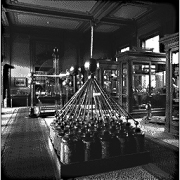